Cannabis in Guam: An Overview | PotGuide.com


If you went to elementary school in the U.S., chances are you’ve heard the song “Fifty Nifty,” a clever mnemonic device that plants a forever earworm of all the states in alphabetical order. The tune is handy for remembering what state is last (Wy-ooooooooo-ming!!!), however it did neglect to include the states’ five U.S. territories: American Samoa, the Northern Mariana Islands, Puerto Rico, the U.S. Virgin Islands, and Guam.

While cannabis legalization continues to steamroll its way through ballot initiatives and state legislatures across the U.S., the residents of Guam have had access to legal medical cannabis since 2013 and legal adult-use cannabis since 2019. So now that we know that cannabis is legal there, how is the cannabis industry unfolding in the territory? Let’s have a look.

Cannabis is Legal in Guam

The Joaquin (KC) Concepcion II Compassionate Cannabis Use Act of 2013 broke the barrier first by referendum, and easily passed 215-32 with 56 percent of Guam residents supporting the initiative. The law allows for qualifying patients to consume and possess up to 2.5 ounces of cannabis from a licensed dispensary.

In 2019, Guam Governor Lourdes Aflague “Lou” Leon Guerrero signed the Guam Cannabis Industry Act of 2019, which legalized adult use of the plant and authorized the creation of a system for the recreational sale of cannabis products. Guam’s retail market is not yet up and running, but the law allows for adults to grow up to three mature cannabis plants and to give away up to one ounce of cannabis, though selling it is illegal.

While Guam now has legal cannabis laws, it appears that locals and tourists alike will encounter challenges in obtaining it. For example, Guam’s economy is largely driven by U.S national defense spending. Guam serves as a forward U.S military base of the Western Pacific and thousands of military personnel reside on the island. Regardless of where service members reside, members of the military are forbidden from consuming cannabis, period, even if it is legal in a particular locality. 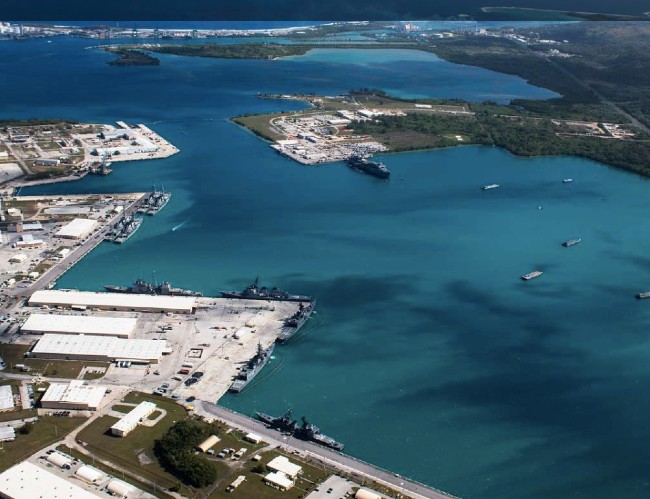 A large portion of Guam’s population consists of military members and their families. photo credit

Even consumption of the non-intoxicating CBD among military members is verboten. Army Substance Abuse Program Manager Katina Oates recently stated, “Regardless of its widespread availability, it’s [CBD] a federally prohibited substance and, therefore, illegal within the DOD workforce.” Military spouses may consume cannabis, but their ability to do so is limited. There is no consumption allowed on military property, which includes any base or any military housing either on or off base.

Cannabis’ Impact on Tourism in Guam

Legal access to cannabis is also facing resistance from local tourism officials, who have cautioned against allowing cannabis businesses to operate in the island’s Tumon tourist district. In public hearings with the Cannabis Control Board last November, tourist officials argued that visitors – many of whom come from Asian countries like South Korea – will stay away from the island because of differing attitudes about cannabis consumption and potential legal penalties in their home countries.

They also believe that making cannabis available to tourists could cost the island $486 million in lost tourism revenue, and damage the island’s reputation as a safe place for families and children to visit.

More recent hearings of the Cannabis Control Board have completed the draft rules and regulations for rolling out the legal industry, but wariness remains, especially around larger companies creating monopolies and pushing out local businesses. Proponents of legal cannabis have argued that it’s a major revenue generator (Guam’s tourism industry dropped a whopping 98 percent in 2020 because of COVID) and that legal cannabis can help them compete with countries such as Japan and South Korea that have fared better during the pandemic.

Guam lies approximately 5,800 miles west of San Francisco and 1,600 miles east of Manila in the Philippines, and at first glance looks like an incredible place to visit, rich with 4,000 years of history, white sandy beaches, easy access to nature, and outstanding shopping and restaurants. While most of us still can’t venture far from our homes, when we can, maybe it’s a good time to book that ticket to Guam. Won’t it be fun to prove local tourism officials wrong about cannabis?

What are you excited for in Guam’s blooming cannabis industry? Share in the comments below!

Is today's cannabis higher in potency?

Growing Weed Indoors or Outdoors: Which is Better?

6 Things You Need to Know About Traveling With Marijuana

Is Cannabis in America Better Than Amsterdam? | PotGuide.com

Are Portable Dab Rigs (E-Rigs) Worth the Money? | PotGuide.com

How to Age Gracefully

How To Identify & Fix IRON Deficiency in Cannabis Plants